Posted on March 16, 2016 by thepickledonionyucatan

Coca cola first came to Mexico in the late 1800,s and established the first bottling company in the 1920,s.

its claim to fame it that it is sweetened by cane sugar as opposed to high fructose corn syrup .Which is not always as claimed.

It is one of the most popular drinks amongst the village people… breakfast , lunch and dinner to be drunk . 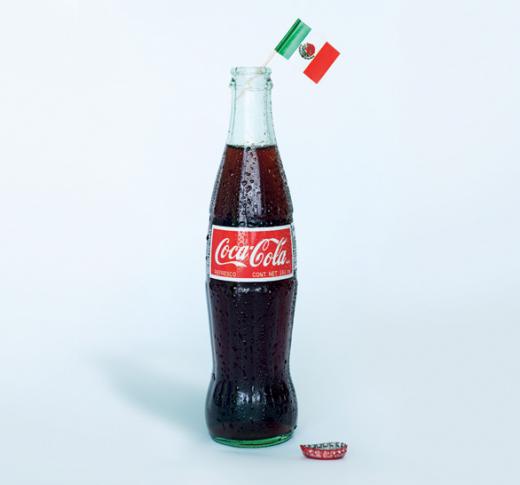 Years ago before the plastic bottles the people would go to the grocery store where they would buy their wares and drink a coke….and listen to the local gossip.. They were  not allowed to take the bottle off the premises but had to be drunk there and then so the bottles would be returned.

Quite a few years ago I changed from the plastic bottles to the infamous thick glass ones the reason being that they are returnable therefore helping in my small way to conserve the environment .And the taste did seem very different than coke in a plastic bottle .

The glass bottles seem to be a rarity and I have had many a guests ask if they could take a bottle home with them  . Of course you can and off they would go without me charging the returnable fee.

But when a young man with his family started to walk out with a bottle without any thought or consideration I was , to say the least a little peeved.The waiter motioned to him to say sorry you cannot take the bottle and I intervened saying politely yes you can take it but there will be a charge of 5 pesos as it is a returnable bottle… His response just threw me….. Yeah! whatever! as he shouted to his parents that he needed money to take the bottle. They left in a huff! My point is… whatever gave the right to this young man to think he could just walk out with property that belonged to the restaurant ?

If he had asked I would certainly let him go with his memorabilia without an issue.

Yes you may think it is minor but who is going to teach the young ones of today respect for other peoples belongings if their parents are not going to .

I would not be surprised if this comes about on Trip advisor but I will be ready for the answer if it does!

Born in England emigrated to Canada and now reside in the Yucatan Mexico. LIfe is a journey so enjoy as much as you can
View all posts by thepickledonionyucatan →
This entry was posted in Food/drinks and tagged Bottled Coca Cola, Coca Cola, Mexican coca cola, Santa Elena, The Pickled Onion restaurant and hotel, Uxmal. Bookmark the permalink.