Spring fever for the pre-school

Posted on May 17, 2013 by thepickledonionyucatan

Spring fever came  a little late this year due to the bullfight that took precedence over everything else. I had no idea they were going to celebrate until  I dropped into one of the local stores and there Eric the owner was busy creating what looked like a shark. He was painting the sea waves on a board. I am always  interested when I see Eric doing some of his art work. He is very talented! 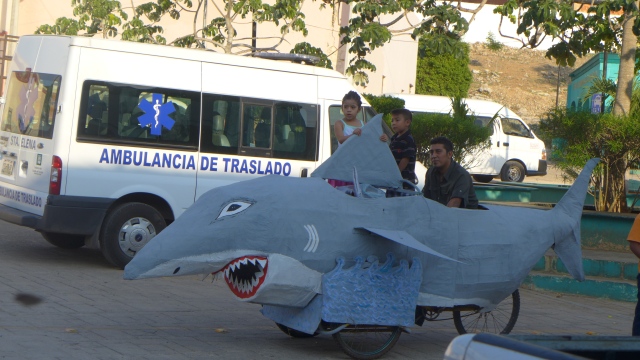 Tiburon that Eric made. He is in the driving seat…..a tricicleta converted
Notice the new ambulance for Santa Elena in background

What is it for ? I asked. The pre schoolers are having a spring parade  and my son will be dressed as a Tiburón(shark). With that his wife brought out a bag from the back and preceded to take out the costume that had been made specially for the show.The costume was amazingly well done.

Is that Johnna in there?

Eric then informed me the parade would be on thursday around 5pm .

Arriving in the village square around 5.30pm ( one never arrives on time)people were still milling around waiting for the parade to begin. Actually they were waiting for the sun to go down as it was quite hot, too hot for the Little ones to be parading with their costumes on. 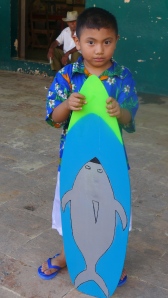 By 6pm it was on the road……. they walked around the block before finishing at the Concha ( sports area and multiuse area)

I think by now you got the jist of the theme! 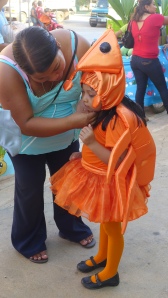 You are my Little shrimip

Once there they would be dancing putting on a show for the parents. I did not stay for the show but wished I had.

I will post more photos below ,they are so sweet the Little ones .

Born in England emigrated to Canada and now reside in the Yucatan Mexico. LIfe is a journey so enjoy as much as you can
View all posts by thepickledonionyucatan →
This entry was posted in Local News/Happenings/interest and tagged a stitch in time saves nine, disfrases, mothers love, Parade costumes, St Elena Yucatan, The Pickled Onion restaurant and hotel, Uxmal. Bookmark the permalink.

2 Responses to Spring fever for the pre-school