Yucatan.s traditional dress and its progression

Posted on May 12, 2012 by thepickledonionyucatan

The evolutionary history of the typical dress of the Yucatan

There have been many influences, including Arabic, over the passing years that have created the many changes of the typical Yucatan dress of the women and also of men.

The rebozo, shawl as we know it, of Santa Maria, is included in one of the most popular Jarana dances and used as an emblem. Until 100 years ago it was not a part of the clothing’s of the mestizos yet in changing it was used to cover the head. The rebozo was actually brought from Puebla in the time of Porfurio Diaz. It was one of the last elements to enhance the dress.

The origins of dress were a simple sack like square sewn together with openings for the arms and neck. It lacked a lot of what we now have become to know, the typical dress.

The prehispanicas, the indigenous women walked topless and only dressed in a skirt most of the time. It was the Franciscan monks that insisted the skirts be lengthened and a top should be worn. 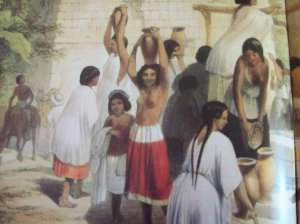 Lithiograph of Catherwood showing the typical attire of his era

With passing of time the textiles became much finer and they began to adorn with embroidery. The clothing has passed many stages

The terno was to become fashionable around 1847 during the war of the cast system and was influenced by pomp and ceremony of the time.

The style of the the terno had been narrowed,widened,lengthened,shortened and also a time when the style was known as minihuipil. This design of dress was embroided around the neck area and the bottom. Sometimes a skirt was added to elongate but usually adorned with lace or crochet style lace

After came the embroidery and Brussels lace to make it more elegant. It was then when the costume of the mestizos began to take shape as we know it now.

A Metiza wearing the tradicional huipil with robozo in hands

They then added a doublet,  that goes over the shoulders and it became a terno. Again the terno is a sack shape rectangular piece of material with openings for arms, neck and head. The doublet was then embroided as well as the bottom of the dress. To this was added a skirt called a justan which falls from the waist tied with a belt down to mid calf or  now the most popular form is elastic . Now it seems the fashion is to go full length to the ankles. Again,which is added a line of embroidery

There was a time when the embroidery made references to the local fauna, animals etc and one could tell from which area came the ladies. But now again this has changed and fallen f rom fashion to be replaced by only flowers.

Again the style is changing from the laborious embroidery came the machine embroidery .Some of the designs would surpass your imaginations due to the intricate work. Another fashion creeping in is the art of painting the designs onto the fabric. A much faster way, but sadly the art of embroidery will be lost in the next generations.

The huipil is usually worn during the day again a sack like dress with openings for the arms and head .Most often the neck area is in the form of a square shape to which embroidery is added  and also around the bottom.Again a shorter justan (skirt) is sometimes worn underneath with a crochet border or maybe a lace border that shows just below the huipil . Not as intricate as the terno but still they can look very elegant.

one of my huipil that I like to wear in the hot weather as they are so comfortable.
The black and white design is known more in the area of Campeche

.Now you will not see the young ones wearing the traditional dress during the normal daily life only a few of the older ladies still will wear them in the village here of St Elena.The young ones of course are going for the more modern look saving the elegant ternos for special occasions or traditional fiestas.

Part of this information was taken from the Yucatan daily known as the Diario de Yucatan .If you are interested in reading more, albiet in spanish you can check on the comments for the link.

Born in England emigrated to Canada and now reside in the Yucatan Mexico. LIfe is a journey so enjoy as much as you can
View all posts by thepickledonionyucatan →
This entry was posted in Local News/Happenings/interest and tagged Embroidery, Huipil, Maya civilization, Ruta Puuc, Uxmal, Yucatan. Bookmark the permalink.

6 Responses to Yucatan.s traditional dress and its progression