Posted on April 27, 2012 by thepickledonionyucatan

Sunday was an eventful day here in St Elena where I was invited to attend a shamanic ceremony called Huay e col. This is a ceremony to ask the rain god Chaac to bring forth lots of rain for a good harvest for the coming season of planting. I felt very honoured when Martha and her sister Ileana came by two days earlier specifically to invite me to attend. The Magna family where the ones to organize everything even to the use of their land where they rear turkeys amongst other things.

It was a full day affair starting off with preparing the turkeys for the pot. Im not sure what time they started but I am it certainly would have been very early. 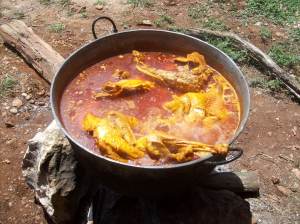 I arrived around 11 am with two of my B & B customers who had shown a great interest in coming with me. The women were already making the tortillas digging in to 5 gallon buckets of masa (ground corn) dumping large amounts on the table where everyone dug in their hands pulling out enough to form a tortilla. Valeria come and make tortillas with us! They called out as I arrived in the area they were working. I’m not very good ! I exclaimed. We’ll show you. With this I dug in my hand and pulled out enough to start making a tortilla. I watched the women closely as they shaped their tortillas by hand moving the masa in a circle with their nimble fingers, all the time forming the well-known shape of a tortilla. My first try was O K but needed some help but by the second one I got the hang of it. One or two of the women nudged each other smiling. You learn quickly, Dona Valeria. When do I get my diploma ? I asked. All burst out laughing as one replied.. Not until the clausura in june(in other words not until school is out.)

I continued to help out making quite a few … Then I glanced over at the 5 gallon buckets there must have been seven or more. How many more tortillas? All these buckets? So I did a quick look around and found an empty bucket which I took back to the table with me. Look! I said.. My bucket it empty so that means I’m done? Again, uproar of laughter came from the ladies. There is something very special about people around here when they laugh it just seems to warm ones heart it is so genuine

working for my diploma

So back to the making of the pibil . There was a huge plastic bag filled with pepita(ground calabasa seeds) with a scoop made out of jicara (gourd). A gentleman was mixing the pepita with water to make a paste that would be added to the tortillas

Tortillas are piled 12 in all one on top of the other with a mixture of pepita paste in between each layer. Once that is done the pile of tortillas that are laying on prepared leaves (usually leaves of the banana but today they used a plant akin to the henniquin leaves that had been charred, striped and cleaned) are gently pressed out with more pepita mixture on top.

Four holes were made with their fingers and to this was added the mixture of honey, fermented and the holes filled again with the pepita mixture. They are then wrapped and tied into bundles ready for the pit. The last of the masa was used to make the ninos (children). This they did with a tortilla doubled in half and again filled with pepita, closed and pinched together with more pepita smothered on the outside. These were laid in a single leaf like soldiers in a row. 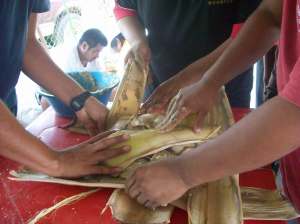 The pit (pib) was dug earlier and all the logs and stones where in place waiting for the pibils to be made. The last thing to go onto the stones where branches and leaves of the symbolic Roble tree (oak). The pit was then covered with the pibil and the fire lit all the time piling earth onto the fire until all the pibes were covered. I then left for a short while to take a cooling off shower and a change of clothes

. Upon my return I heard I had missed the shaman walking on the hot coals of the lighted pit, to everyone’s amazement. Don Felipe the shaman had been brought from nearby Bolonchen which is about 30 mins from here in the state of Campeche. 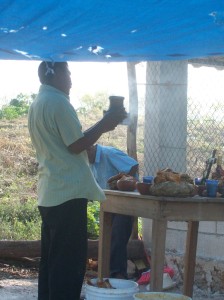 A quiet gentle soul who told me he had learnt all he knew from his father who was now on the other side. His simple alter was partly prepared waiting for the pibes to be cooked. When they came out of the pit he took a couple that he broke open and placed on the altar with cooked turkey.

The rest of the pibes were taken over to the ladies where they immediately started the laborious job of crumbling them all into fine pieces which would later be added to the liquid of the turkey, the cooked innards and  mixed with lots of mint spices and tomato.

A large bucket was taken over to the shamans table where he began his prayers, burning of copal incense finishing with burning his prayers that were written on paper allowing the universe to take care of them.

We then partook of the ceremonial drink made form a certain bark of a tree and honey and the food was then dished out. It was delicious and very tasty some coming back for seconds.

People from the village started their invasion with pots or containers in hand .All the villagers who attend are welcomed to partake of this special food of the gods As I was getting ready to leave Don Felipe came over and gave a blessing, dowsing me with ceremonial water.

I said my goodbyes and thank you to Martha and Ileana but I was not allowed to leave without a gift of more food to take home for the staff. As I was leaving I turned and said… when you want more tortillas making ,call me … I now have my diploma! Walking away I heard the roar of laughter from the women. How lucky I am to be here in the heart of the maya land with these wonderful people.

Born in England emigrated to Canada and now reside in the Yucatan Mexico. LIfe is a journey so enjoy as much as you can
View all posts by thepickledonionyucatan →
This entry was posted in Food/drinks, Spiritual/healing/energy work and tagged Maya ceremonies, maya cooking, Maya shaman, Mayan culture, St Elena Yucatan, Uxmal, Yucatan. Bookmark the permalink.