Posted on November 28, 2010 by thepickledonionyucatan

Being so close to Uxmal and the Ruta Puuc region of the southern part of Yucatan ,it,s evident that one day I would write something about it.

Yes ,its true that Chichen Itza has been named one of the new seven wonders of the world . It sits majestically in its own right,proud and strong.If you were one of the lucky ones in the past that was able to climb it you would remember the magnificant view from the top. Like all the Maya ruins it holds a magic of its own with hidden secrets of the unknown. Although they are finding out more of the ancient city, still it does not reveal all.Its masculine structured lines showed to me that it certainly was a city created by man and the sense I got whilst walking around was of a war like city.

I was one of the lucky ones a few years ago to be able to experience this wonder and climb the steep steps of el castillo and I was in awe.But what left a bad taste in my mouth was ALL the vendors that were selling their wares. It seemed every two minutes some small child would appear  as from nowhere with trinkets to sell . No matter how many times you would politely say , no gracias,one still felt bombardedand unable to really enjoy the experience. 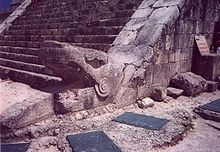 The head of the feathered Serpent Kukulkan/photo Wikipedia

Uxmal ,located  south of Merida , again is a popular tourist destination but not so much as Chichen Itza.The pyrimid of the dwarf welcomes you in with its distinct Puuc style, softly rounded corners that seem to embrace you. Upon  entering through a turnstile you will not be accosted by vendors and  are left to walk around in peace.

Pyramid of the Magician/dwarf/photo wikipedia

The feel is of a more feminine energy and its said that the older women would teach the young girls spirituality in the quadrangle de monejes .One feels more at liberty to climb at least one of the pyramids .Here you get more of a sense how life would have been in those ancients days of the Maya people.Its one of my favourite ruins to visit and I never tire of it. Always finding more interesting things to view.You may think that I am biased ,living so close but its by far much more interesting than Chichen Itza.I am not the only one to say this ,tourists that pass by my place for a bite to eat 100% say they  prefer Uxmal over Chichen Itza. Maybe this site should have been named as one of the new seven wonders of the world!

photo taken when I went to watch a concert in Uxmal

Born in England emigrated to Canada and now reside in the Yucatan Mexico. LIfe is a journey so enjoy as much as you can
View all posts by thepickledonionyucatan →
This entry was posted in Uxmal and tagged Chichen Itza, El Castillo Chichen Itza, Hotel, Kukulkan, Maya civilization, Retuarants, St Elena Yucatan, The Pickled Onion restaurant and hotel, Uxmal, Yucatan. Bookmark the permalink.